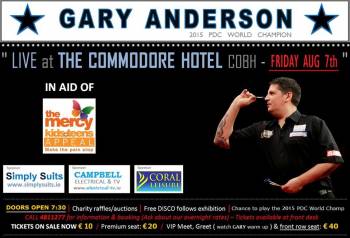 PDC World Darts Champion Gary Anderson is lending his support to a fundraiser for the Mercy Hospital Foundation by treating Cork darts fans to a special and exclusive showcase that will be held in Cobh on August 7th.
The Flying Scotsman, who denied Phil ?The Power? Taylor a 17th PDC title earlier this year, is supporting three dedicated darts fans who are aiming to hit their target of raising a total of ?20,000 for The Mercy Kids & Teens Appeal.The event, which will be held in Commodore Hotel, will be the third such annual darts exhibition organised by Cobh residents Damien Rowe, Richie McGrath and Adie Walsh to raise money for the very worthy charity.

The top prize up for auction on the night will be a once-in-a-lifetime chance to play against the PDC World Darts Champion Gary Anderson.Damien Rowe explained how the cause is one close to his heart since his niece developed a rare type of childhood cancer that develops in infants and young children.
?Our family was shocked to the core when my niece was diagnosed with Neuroblastoma. She was treated in The Mercy and thankfully, came out the other side. Myself, Richie and Adie are big darts fans so we organised a fundraising darts event in the Commodore Hotel and to date have raised over ?13,500 for The Mercy Kids & Teens Appeal. Three years on, our annual darts night is still going strong and we hope to break the ?20,000 mark this year. Handing over the cheque each time has been such an amazing feeling. We?re very grateful to our sponsors for the last three years ?the Commodore Hotel, Simply Suits, Coral Leisure and Campbell Electrical.?