Brenda is going to great lengths 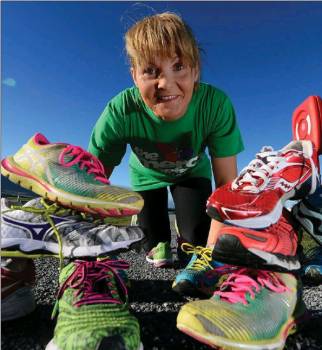 Brenda Doody, from Tralee, County Kerry, is running 12 marathons in 8 months to raise funds for the Mercy Hospital – the hospital that saved her husband’s life.Brenda is set to take on the challenge of a lifetime in what she hopes will become a major fundraiser for facilities and research at the Mercy Hospital.

Last September, Brenda’s husband, Pat, underwent surgery to remove his oesophagus after developing cancer in the tract. Thankfully, Pat has since been given the all-clear – but the year took a massive toll on both him and his family. Now, as the Doody’s continue to come to terms with the year, Brenda is gearing up for a massive challenge that will see her taking on 12 marathons, starting with Tralee in March!

“I’m ready for it all and I hope it’s going to become a massive fundraiser. I just wanted to do it for the Mercy and the work of consultant Tom Murphy, who saved Pat. Tom and his team were amazing and I just feel the least I can do now is to raise as much money as possible for research at the hospital.”

The single biggest feat of her campaign will involve four marathons in as many days in Donegal in August. Incredibly, Pat is even planning on doing one of the marathons with her, health- permitting. Brenda is now calling on everyone to come out in support of the Mercy Hospital and her campaign to conquer ‘The Big 12’.

We will be following Brenda’s progress thoughout her marathons and will keep you posted on Facebook and Twitter. You can support Brenda by going on to www.fundraise.mercyfundraising.ie and clicking on Brenda’s Mercy Marathon Challenge.