When Blarney man, Denis sat down with his wife Angela to discuss the wonderful care and attention she received at St. Therese?s Oncology Unit at the Mercy University Hospital, they both felt they wanted to give something back. Sadly, Angela passed away in 2013, but her legacy lives on in the wonderful work both Denis and his son John do through the Recycling Appeal which has been in operation since mid-2011. Almost 700 companies and organisations across Munster, including Cork County Council and Veolia, have already signed up to the Recycling Appeal, which has seen ? million cartridges saved from landfill. The simple, yet very effective initiative sees Denis and John deliver boxes to the companies around the province, who fill them with empty cartridges, which are then collected free of charge by the duo. 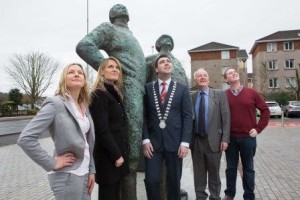 Funds raised through the initiative go to the Mercy Cancer Appeal, and specifically toward the building of the Mercy Cancer CARE Centre. The Mercy Hospital Foundation is building this specialised Cancer CARE Centre next to the Hospital to provide a quiet, safe place for patients and families to help them deal with their cancer diagnosis or to receive ongoing support during their cancer journey through one-to-one support, peer-group sessions and bereavement counselling in a nonclinical and relaxed environment.

Speaking about the campaign, Denis O?Donovan said ?I?m enjoying every minute of running this campaign encouraging people to be a part of something bigger than themselves. The absolutely fantastic support and reception we have received from businesses, up and down Cork, Kerry, Limerick and Clare, who go out of their way to keep the cartridges is unbelievable, and I want to thank them for their support to date. I would urge more companies to come on board ? it?s a completely free service, we take away your empty printer cartridges which helps you, and you are raising much needed funds, which helps the Mercy!?

Sign up to the Mercy Recycling Appeal here. To find out more, contact Michelle on 021 4274076 or email michelle@mercyfundraising.ie